Will Of Steel: An Immortal Journey | SoPosted

I take this moment to thank, Bosco, my motorbike, my brother, my friend in misery.

Life is an analogy to the National Highways of India, firing challenges on the face from all possible wrong sides and angles. Stay calm, lift the guards up and dodge!

This man’s life is no different. So far, a year full of landmines, personal life roasted and toasted, comes to rescue his most natural instinct, “riding”. Backed off from two riding expeditions since last December, his hands were shivering but not his deep down desires. That’s what depression does, makes one so miserable that an individual starts fearing the most loved passions and wishes.

FYI, this man has been long fighting a chronic Coccyx injury, recently been diagnosed with golfer’s elbow and to top it all, splenic flexure syndrome causing excruciating pain under left rib cage. All three put together, a perfect recipe for “a rider’s nightmare”!

Doctor stated, “For you, motor biking is forbidden mister. You can’t ride even 50 KM with all that in your body, period.”

“I will.” He smiled and said. Fixed an orthopedic seat on his beloved Bosco and rode towards an expedition that will give his life a new direction.

EAST, The Land Of The Rising Sun! By God, the throttle was full and so was his “Will of Steel!”

The Kick Start: Nothing But Helmet And Gloves

Under the shadow of stars, “Our Rider” silently left his house to join the three legendary riders Rajat, Pulkit and Varinder on Yamuna Express Highway. He says, “It’s the simple law of attraction, what you feel now is what you are going to attract. So don’t fear accidents, and just ride.”

Hence, no protective gear except a pair of riding gloves and a helmet. When you start a journey, it takes time to adjust the riding position and engines don’t get revved up immediately for a highway ride. Riding East means embracing the rising sun, ignoring the blistering heat of UP & Bihar, limiting the water intake to avoid splenic flexure’s pain, and tasting the dry salty lips courtesy a continuous sweat bath.

Now, fitness calls for a test, “hallucination”. How about some crosswind to make it dreadful for balancing a motorbike at that speed? Not enough! Ok, perpendicular leg position for hours exposing knee to the wrath of hot air, so once it dries, the constant thump of engines can make it pain like hell. *Ouch!* I know that’s painful. But, for you and I! For these guys, forget it. They clocked ~900 KM till Gorakhpur on day one. Insanity has just begun. Following day, 750 KM. Zeus was waiting eagerly for them! They made it to Siliguri in less than two days, with and like a thunderstorm. Lesson learned, even the universe will acknowledge your efforts, if your dare to make some.

Now begins the ‘glide’ from Siliguri to Gangtok, 120 KM of beautiful road with lush green site everywhere. River by your side and clouds in the sky, scenic beauty redefined curve after curve. At the repair workshop, Our Rider met Jack who was constantly circling around, licking his shoe and wasn’t letting him go. Intrigued by all this, he picked up Jack and kept him on Bosco. Jack was super thrilled. Jumped all around the handle, then onto the fuel tank and was trying to crawl up Our Rider’s face. 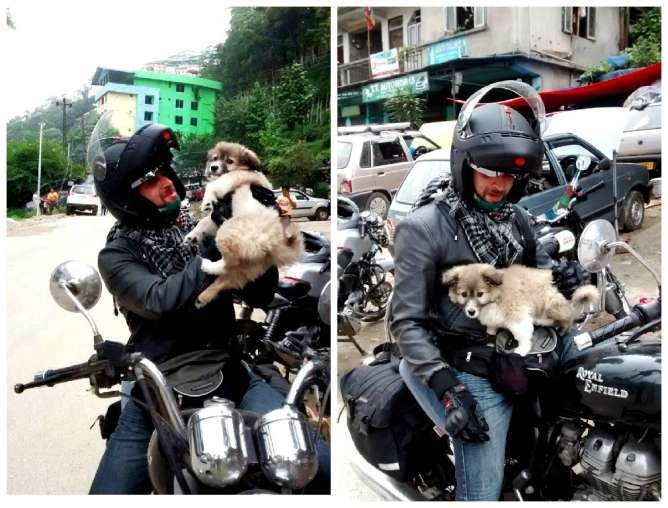 Finally, Jack cuddled himself around his waist pouch and sat as if he was home. Against his wish, he kept Jack on the road, offered some biscuits and then took his leave. Jack generously raised his one paw to see off.

Our Rider said, “I sensed Jack was trying to convey some message. What? I don’t know. This is etched in my memory for a lifetime.” Jack, the little stray dog, didn’t have any name until Our Rider crossed his way. This guy hated dogs but now he has started naming everything where he found life. Being a traveller that’s what happens; you take a step closer to be human and humanity. All the more, feel humanly. Watch it! Traveller not tourist.

Since, the road to Nathula Pass and Gurudongmar Lake was under construction, the gang headed for West Sikkim, where the colour “greener” is applicable. They summarized it as, “Roads to off-road and no sign of sign boards.”

To share a laugh, just a vibe is enough. A bunch of laughing kids waved their hands at Our Rider. So he stopped by to play around. Life is one of those laughing kids, who was dumb (if only he could explain it). Icing on the cake, “It was a full moon ride.” A ride towards that big golden disc at a distance seems touchable yet sacred. Sigh!

Next day, remains of Rabdentse Palace, where incredible isn’t even closer a word. Same night breathtaking voices came from Pelling Fuel Center. He said, “While people fight to sing at a karaoke, those 15 people were singing together. Who needs a mic? Simplicity redefined.” Next day, they headed to ‘breathe’ the ‘taste of tea’ towards Darjeeling, witnessed the world heritage ‘toy train’ and satisfied their taste-buds with ‘Rezala’. All of that added to their insane sanity, one after another, for what seems insane to most of us.

First leg of journey closed after 2200 KM at Siliguri. Corporate life asked Rajat and Pulkit to ride back to Delhi, while Varinder went ahead to Orissa. But Our Rider and Bosco set course for the greatest expedition of their life, the second leg of this journey. BHUTAN!

Siliguri to Bhutan border, tea gardens on both the sides, till your eyes meet the horizon and up ahead eastern Himalayan ranges of Bhutan. At the Phuentsholing’s immigration office, the officer said, “We don’t allow solo riders. It is too risky.” Fortune favours the brave; Our Rider wrote an undertaking for being solely responsible for any mishaps and rode to Thimphu.

Clicking photos, recording videos, lying on the roadside and breathing freedom. That Saturday night he went out to a local party, had local Thukpa and local beer, sang local songs with the locals as a local, but in a foreign land.

Following day, Buddha point, Trashichhoedzong, Thimphu Chorten etc. kept his eye resting on the serenity of nature and head echoing with silence. Next up, a riverside ride in the wide open Paro valley. Rain pouring from one eye of the clouds and sunlight from the other, everything else was dry. Our Rider stood there, STONED!

In the morning, he started his trek with another Jack and a monk towards the cluster of white dots in the middle of the mountain, that he saw last night from his resort. As he hiked to the top, it appeared a tip of gold was coming out from the ground in all its pride and esteem with every step forward. 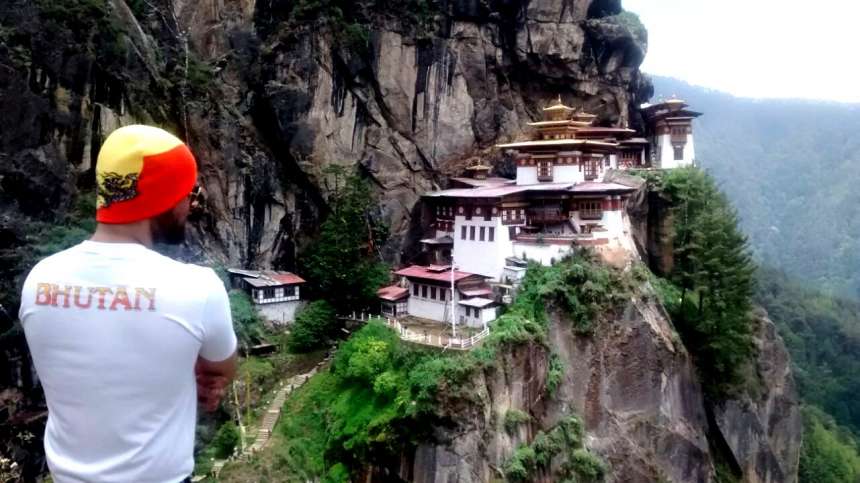 Law of mutual induction. He stood straight with his arms crossed; head held high and humbly asked the monk, “How could I come this far without any fears?”

Respecting the monk’s words, Our Rider took a U – turn to Thimphu and headed for Punakha. First, he stepped on Chelela Pass, the highest motorable point in Bhutan, and on his descend, saw the beautiful black & white carpet airstrip of Paro Airport amidst the mountains.

After Months Of Depression, I Felt So Alive!

Same day, the glorified 108 Stupas covered with clouds on Dochula Pass. Next morning, at the Punakha valley, Our Rider was the first one to enter the Dzong. He continued chanting his secret prayer while rotating every prayer wheel. After the final wheel, he saw a newborn girl who was not even a month old. This was the background when he held her: monks chanting prayers, sound of pigeons’ cooing and their flight feathers’, river crashing into stones, light drizzle and the constant breaths of this newborn in his ears.

He said, “After months of depression, I felt so alive.”

This was the onset of an epic solo return; third and the final leg.

He tracked back to Siliguri and got Bosco repaired. Then, rode across to Aurangabad from Siliguri via Patna, 650 KM including NH 98, which didn’t have roads but craters.

14th June 2015 morning, “Mom! Dahi, Aaloo and Chapati tonight. I am coming home.” A body full of ailments but a soul full of will and self belief. It was raining kilometers on NH2. He was flying. At the stroke of the midnight hour, Our Rider paid a grand salute in the name of #IPrayForNepal at India Gate. Had a chocolate truffle and called in his ride, on that angel number of 999.9 KM, right under his shed.

Any rider’s dream in a single day!

That’s a staggering average ride of 1.04 KM per minute for 16 hours on a cruiser bike. 4900 KM in 16 days. Not a big number to conceive for many legendary riders reading this, but for Our Rider, it wasn’t the KMS but the moments that counted.

He averted 22 encounters because of the senses he gained as a souvenir from this soul trip.

What the doctor said stood falsified; what his soul said worked wonders. Not only for him but for those whom he met and maybe for those who are experiencing this journey through words.

HE ULTIMATELY WON WHAT HE HAD LOST. A direction!

Our Rider is a very dear friend of ours, who has flagged all the checkpoints on the Golden Quadrilateral circuit. Currently, he is in talks with NGOs for his upcoming big rides which will raise funds for social causes. 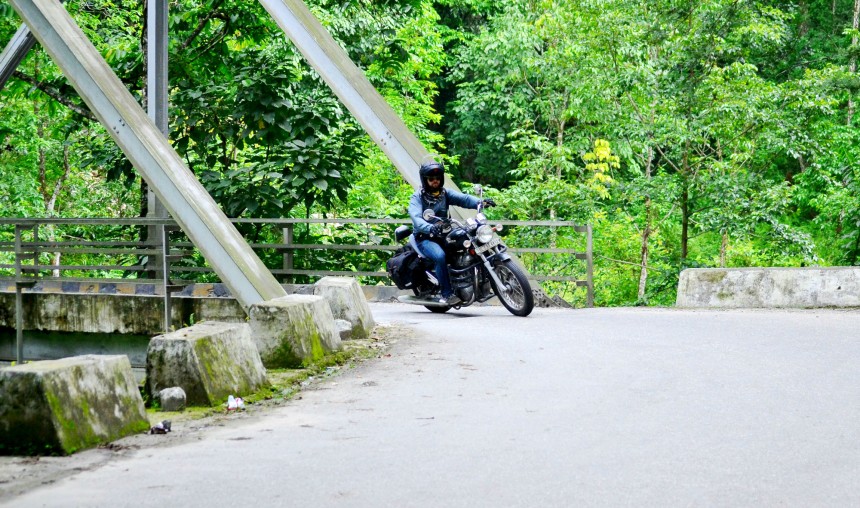