Troubled by The Owner, This Dog Finds Shelter in A Lion's Cage

You might have heard a lot of heartwarming stories of friendship between cats and dogs. But have you heard of a bond between a dog and a lioness? Not likely, right? This amazing story will fill your heart with warmth. Read on to know more about this moving story…

This female dog, named Si Mao, living in Central China ran away from her abusive owner and took shelter in a lioness’s cage. 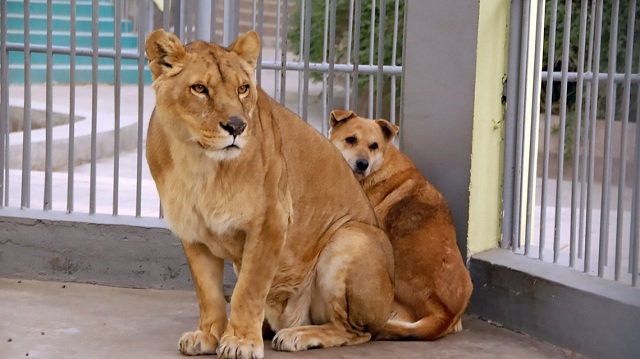 The incident is such that she had eaten her owner’s lunch when they weren’t looking. The owner family happens to be an abusive, and violent bunch of people. Si Mao knew very well that she would be “punished” for eating the entire lunch. So she thought it’s better to run away from home itself.

Fortunately, the lioness she took refuge happened to be a very loving, and docile creature. From the beginning itself, Si Mao had a special bond with the four-year-old lioness named Zhen Zhen. For some God knows what reason, Zhen Zhen became Si Mao’s watchful protector and guard. The lioness snuggles with Si Mao, shares her food with her, and sleeps with her.

The workers at the zoo have said that they are not planning to remove Si Mao from Zhen Zhen’s pen as these two have become the best of buddies now. The workers also added that had Si Mao stepped into the pen of a tiger or any other wild animal, she would have ended up as their snack. Zhen Zhen, surprisingly has never tried to harm Si Mao.

Zhen Zhen shares her food with Si Mao because at least this is better than living with her previous owners who were abusive and ill-treated her.

So despite being an apex predator, this lioness is best friend with this dog and people come to see this magical bond between them!

Also read: 13 Life-Changing Advices From 60+ People Which Are A Must Read For Everyone!