Superstar Aamir Khan played the character of ‘Phunsukh Wangdu’ in 2009 blockbuster ‘3 Idiots’. The role was inspired by Sonam Wangchuk, who has now won the Rolex Awards for Enterprise 2016.

The awards were presented on Tuesday in Los Angeles to those “who have reshaped the world with their innovative thinking and dynamism”. Sonam’s “Ice Stupas” project is among the five winners this year at the awards. 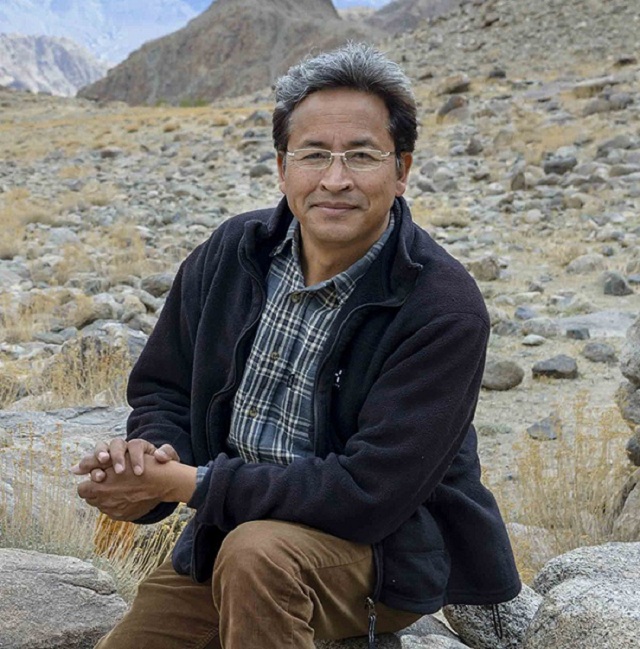 Sonam Wangchuk, a 50-year-old Ladakhi engineer, has been attempting to solve the problem of lack of water for agriculture in the desert landscapes of the western Himalayas by building “Ice Stupas”.

The Ladakh region, at roughly 3,500-metre altitude between the Kunlun and Great Himalayan mountain ranges, faces acute water shortage during the April-May early crop-growing period. Wangchuk was certain that access to water in the desert landscapes around many high altitude towns and villages of Ladakh could be improved if the huge seasonal outflow of glacial water could be frozen.

Inspired by the experimental work of a fellow Ladakhi engineer, Chewang Norphel, Wangchuk developed a simple and effective system, creating what he calls “ice stupas” — conical ice mounds that behave like mini-glaciers, slowly releasing water for the growing season.

“The Rolex Award funds will support the project and promote ice stupas as a climate-change adaptation and desert-greening technique,” Wangchuk said in a statement released by Rolex.

Wangchuk intends to build up to 20 such ice stupas, each 30 metres high and capable of supplying millions of litres of water. The long-term aim is to build an alternative university and engage youth in the environment.

Wangchuk is currently working on establishing an alternative university on the 65-hectare land donated by the village that will engage youth from Ladakh, the Himalayas and other mountain regions of the world in finding their own solutions to the challenges facing them.

“The Rolex Awards were designed to support those whose own spirit of enterprise mirrored the enterprising spirit on which the company was founded,” Rebecca Irvin, Head of Philanthropy at Rolex, said in the release.