Haven’t we all struggled with the different pH numbers for different things when in school? Nevertheless, we loved experimenting the pH scale of various things using the pH slip. Well, Google today celebrates the man who created the pH scale. The search giant honours the Danish Biochemist Soren Peder Lauritz Sorensen for his revolutionary work in introducing to the scientific community, the concept of the pH scale with an interesting Doodle.

It won’t be wrong to say that his creation was a significant study in science and should be celebrated. The pH scale is used to measure acidity and alkalinity of substances, ranging between numbers 0 to 14 with 7 being neutral. Substances with pH number greater than 7 are categorized as basic or alkaline, while substances with pH number lower than 7 are categorized as Acidic.

Born on 9th January 1868 in the Danish city of Havrebjerb, SPL Sorensen headed the Carlsberg Laboratory in Denmark’s capital, Copenhagen from 1901 to 1938, where he studied the effects of the ion concentration on proteins. Since studying the concentration of the hydrogen ion was especially important, Sorensen thought of simply developing a scale as a way to measure the ions. He did so in the year 1909 and was the first scientist to use the pH scale. 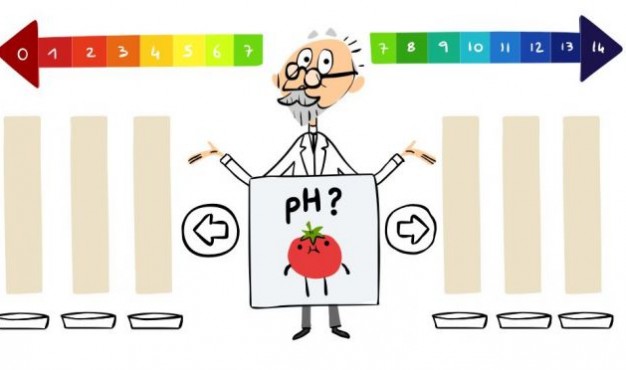 The Google Doodle introduces the pH of different things in a fun way. It asks the user to allot the things to their suggestive places according to their acidic or basic character. For instance, the pH level for eggs stands at 8, while the pH level for lemons and tomatoes stands at 2 and 4 respectively.