Everyone knows that sharks are hunter fish who eat other sea animals but this time a monster Goliath Grouper swallowed in a shark leaving everyone in shock. A video is going viral on the internet in which a massive fish managed to steal a shark from a fishing line. Shared by Everglades Fishing Company, a company that charters fishing boats, showed the moment when a 500-pound goliath grouper gulped in to swallow a 3-foot shark before the fishermen could reel it in. According to Newsweek, the incident took place in the Gulf of Mexico, and the video was captured by tour guide Jimmy Wheeler.

The video left everyone amazed whoever watched it. It has already garnered 60,000 views and thousands of comments on Facebook. While many people felt that it was an incredible moment, other Facebook user believed That was an amazing thing to experience and see!” 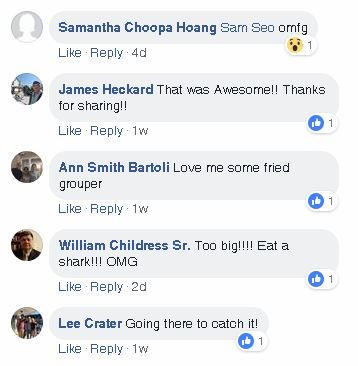 According to Fox News, the fishermen wrestled with the goliath grouper for a few minutes until the line finally loosened and it spits out the shark, which the fishermen planned to catch and release.