Two minutes of Terror! Bull Shark steals flipper from diver's foot after he kicks it | SoPosted.com

A diver witnessed the most terrifying encounter of his life when a bull shark attacked him on the Australian coast. A student called Lachlan Pye captured the encounter with a bull shark when he was diving off the coast of Lucinda and spearfishing for coral trout. After catching a fish, he was coming back to his boat when he was joined by the 11-foot-long shark in the water. Pye said, “I took the easy shot and started to come up. As I came up, this bull shark charged me. It came out of nowhere.”

The 18-year-old student explained that he didn’t see it coming and was terrified. He revealed that the shark attacked his foot and he feared losing one leg. The next moment he started kicking it in order to escape the attack. While he managed to escape the shark’s hold, it stole away the flipper off his foot. Pye told 9News, “I didn’t see it at all until it was underneath me. It pulled my foot down, I felt my ankle move and I looked down and it had taken a couple of chomps at the fin.” 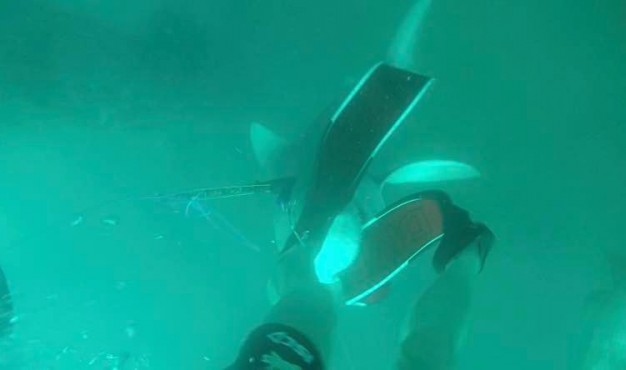 He added, “It didn’t go for the fish really, it just went for me. I feel pretty lucky I’ve got my feet still.” He further called the encounter as “two minutes of terror.” Pye shared the photos of the terrifying encounter on Facebook and wrote, “So this happened. Yesterday this bull shark came up to me and snapped my fin in half and took it right off my foot. Was pretty lucky.”

The hair-raising photos show a bull shark chomping on his flippers and pulling him down. Pye’s posts garnered much attention. One user wrote, “That is too close for comfort. Lucky man.” Another said, “Glad your all good mate. In murky water this is all I think about haha.”