An unidentified man was undergoing a treatment for heart failure but left the doctors amazed when he coughed out a massive blood clot in the perfect shape of his lung passage. The man came for the treatment at the University of California at San Francisco and the doctors decided to connect his heart to a device designed to help blood flow by making it thin, but these devices can cause clotting.

As the surgeons gave him anticoagulants, his airways began to seep. “He had a slow bleed that was ongoing despite the medication,” Gavitt Woodard, a cardiothoracic surgery fellow at the university hospital, told The Washington Post. While the man coughed these clots up over days, Woodard revealed that they were cylindrical and minor at first, like small worms. Although one day he was severely troubled and let out a bright-red, 15-centimetre-wide blood clot with branches identical to the right bronchial tree of his lung.

The image of the clot has gone viral and has drawn equal amounts of amazement and disgust online. The image, published in a photo essay of medical anomalies from the New England Journal of Medicine, shows the bright-red clot that came out without even breaking. “We were astonished,” Georg M. Wieselthaler, the pulmonary surgeon who operated on the patient, told The Atlantic. “It’s a curiosity you can’t imagine—I mean, this is very, very, very rare.” 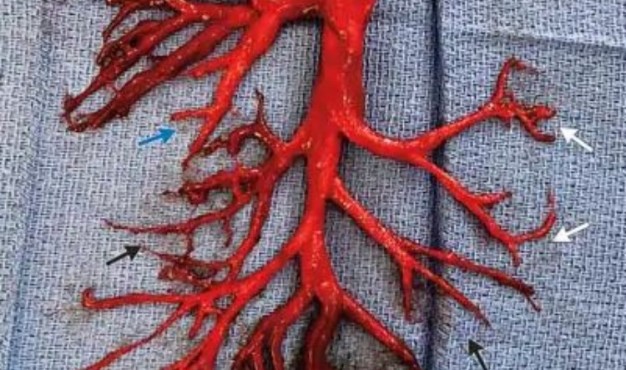 After the incident, the 36-year-old patient was incubated for two days but died a week later. Woodard also revealed that the patient’s death was unrelated to the incident. She further added that the man had severe other conditions as well and the clots he coughed up were a side effect of the medication.