When Duke and Duchess of Cambridge, Prince William, and Kate Middleton visited India Gate and paid their tribute to martyrs of wars that India fought, the only thing India’s leading newspaper, The Times Of India (TOI) saw was how the Duchess fought against the breeze.

The royal couple is on a 7-day tour of India and Bhutan from 10th April to 16th April. The tour began in Mumbai, followed by Delhi and Assam from where they will head to Bhutan. The royal couple will end their tour at the Taj Mahal on 16th April. 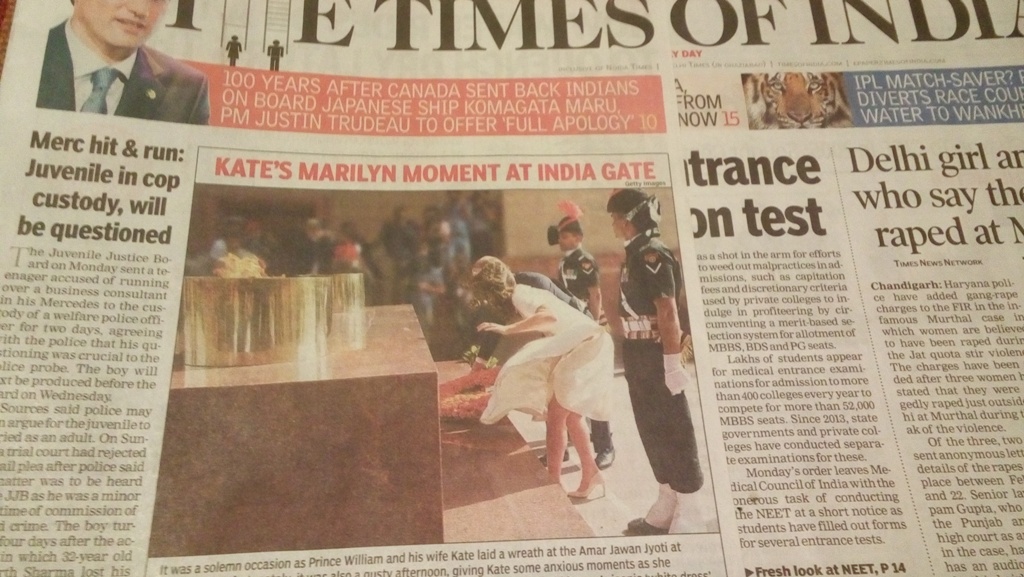 The moment Indian readers opened their newspaper this morning; they saw an unflattering image of the princess and it caught the attention of everyone. Yes, Kate Middleton had a moment of Marilyn Monroe but definitely, there is more to the royal couple who is visiting the country for the first time.

In fact, many showed their displeasure over the front-page coverage of this piece of supposed news and tweeted about this with the hashtag #TOIShame.

Here are a couple of Tweets that show how the mature audience of India is not ready to accept anything under the name of news.

Wonderin hw #TheTelegraph left it out! They wld hv gone bigger than Times Of India .Anyways,#TOI got why it wnted pic.twitter.com/j6UL6RDkro

This is the headline of India’s largest newspaper or should it be tabloid?! #KateMiddleton #RoyalVisitIndia pic.twitter.com/KszBWw9wiR

Interestingly, TOI is not the first time offender of such behaviour, previously also they have done such sins. In 2014, also, TOI had to face public embarrassment when they published a photo of Deepika Padukone from an inappropriate angle. This led to much criticism of TOI’s journalistic ethics and even the actress took to Twitter to express her views. Back at that time, TOI tried to justify its stand with a full-length article but little did it serve any purpose.

Let’s see what The Times Of India does this time.