Pathmeda (Rajasthan): A place where numbers can baffle your imagination. A land where productivity is directly aligned with the dedication for human care and service. Welcome to Sri Pathmeda Godham Mahatirth, the largest cowshed in the world.

From 8-16th April, the Pathmeda Godham is celebrating the 50th year of a revolution which shook the nation on 1967, when a great guru Swami Hariharanandji aka Karpatriji Maharaj gave a call for the nation to gather in the capital of India against cruelty on cows.

It’s not about the numbers and quantity, the way this place has created a space for service, dedication, devotion and creation can amaze anyone.

The basic thought of caring and protecting Indian cows from many social and economical challenges make this place a perfect example of sheer magnanimity.

This place is a case study of one man’s humble duty towards an animal, which is also sacred for Hindus.

The numbers of cows sheltered in different cow service centers which are established and run by shree pathmeda Godharn mahatirth, from the establishment of shree Godham mahatirth till today for last 20 years, are as follows. 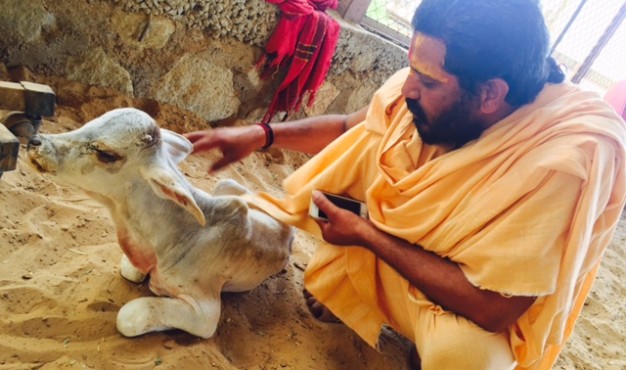 The useful cow descendants are being distributed to the cow rearing persons in thousands of number every year.

The numbers can wonder you. But the more surprising factor is the way they become multiplied year by year.

In 1993 a humble saint , Sri Dutt Sharnanandji Maharaj has taken inspiration from a leading saint of India, Ramsukh Dasji Maharaj and began his journey to serve cows. He roamed all over the country and noticed the status and agony of cows.

The story has more interesting pages when he came across a group of some bad people who tried to sell 8 cows for some cruel purpose. This place was near Pathmeda, Sanchore, Rajasthan.

He started a protest against it and later it became an agitation. The day was the root cause of this grand place of cow service. Pathmeda is situated in Sanchore district of Rajasthan, which is also near the Gujarat border. Dutt Sharnanandji’s vision is today inspiring many people to come forward and take this message forward.

Today many Indian states have banned cow slaughter, but the issue remains as controversial, as it was in the past. Cow is deeply associated with hindu religion. Lord Krishna was the saviour of cows and the devotees of Krishna always see cow as his companion. 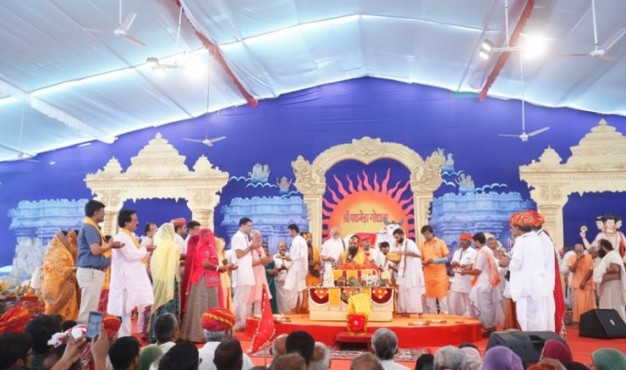 Everyday thousands of devotees gather in the remote area of this cowshed to learn benefits of cow care, the value of cow products and adopting a healthy lifestyle by endorsing pure and organic products.

A senior saint Radhakrishan Maharaj, who is closely associated with Pathmeda, said, “this is an awakening call for all who know the benefits of cows but never think about their life and state, cow is not only an animal, everything it gives is useful to mankind. So we have to be little concern about cow care”.

Sri Pathmeda Godham Mahatirth has successfully cared and protected many breeds of Indian cows. They are also developing cow university, hospital and many other social initiatives.

They have also made their presence felt in FMCG market with their products like Milk, Ghee, Ayurveda, Soaps and Organic vegetables.

The model to promote their brand has made them more reliable and profound. A visit to Pathmeda can impress any visitor, but the real change happens when traditions and modernity mingle beautifully for the welfare of an animal, which is ultimately giving maximum benefit to human beings.

(Bhavya Srivastava is a senior journalist. He is a member of International Association of Religion Journalists)